- Something is happening with the internet.

That’s something I’ve been hearing from people who standup for net neutrality, privacy and the internet’s health. Among all these concerns there are a few hidden evidences that reveals a critical concern: fundamental transformations on how tech business build their empires is causing a huge damage for the internet.

How the internet is changing

The last 4~5 years was marked by a huge growth wave from some of the most famous internet tech companies, mainly Google, Amazon and Facebook. These 3 companies, each one on it’s own way, has been performing a astonishing traffic influence over the web. To understand how, we must look at data:

This is a graph representing where most of website traffic comes from. As you can see more than 70% comes from Google and Facebook. Together they make more influence over web traffic than all another existing referral source together (that’s huge). 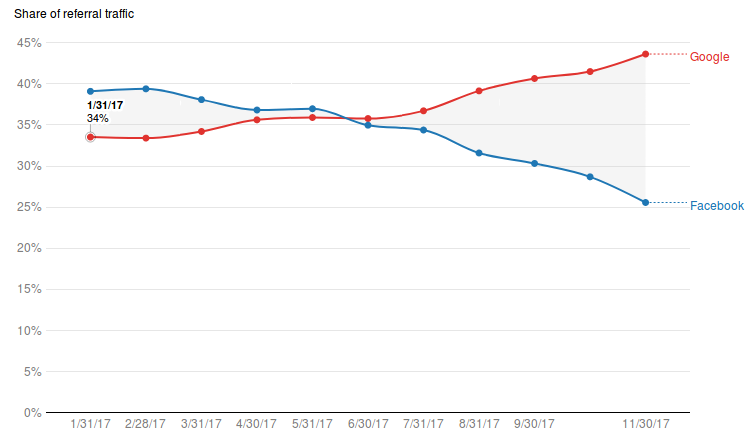 Yes, Google and Facebook are kind of “internet traffic owners” by referring 70% of visits of most of websites.

An interesting way understand Google and Facebook dominance, is to look among media websites. Back in time, (near 2013) one of the most popular way to get visits for your website was to apply SEO rules. Developers used to optimize their code to have their sites found on search tools. There were also a pursuit for being in some media website, as an attempt to get noticed and increase visits, while having a Facebook page and perform some campaing was considered “nice to have”, not that essential.

In many countries, the most visited websites are Google sites youtube, drive, and so on), followed by Facebook. Right after, we have local media websites. Here in Brazil for example we have some famous news websites, such as Globo, IG and UOL.

You might be thinking: “wait, media websites still have significant participation on traffic influence”. Yes, in fact they do. But how do they get page views? In 2018, the Media depends on both Google and Facebook for their own page visits, since it’s the majority of their traffic.

The relationship between media sites and these 2 tech giants is quite difficult. They both have already tried to increase control over news media. In 2014 Facebook created Instant Articles, described as a service “for any publisher to create fast, interactive articles on Facebook”. Instant Articles kept people within the Facebook app, rather than sending readers through to a publisher’s own sites, where they can monetize them way much more effectively and have better control of readers data. Some publishers appearead to be cooling on Facebook Instant Articles and started pulling out from these services.

These 2 companies are not only internet companies anymore. What they have learned from Peter Thiel is that “competition is for losers”. On the last 5 years (since Google+), despite of both Google and Facebook astonishing growth we have not seen they competing with each other. Instead they started focusing in what they are the best. Since 2013 Facebook spent near 20 billion dollars on social media companies/startups acquisition (and that’s just from acquisition costs they disclosed). Facebook is now a monopoly that has power over social relations established through the Internet: including group and private chat, same for photo sharing, video chat, VR environments and so on. Google transitioned from a “mobile first” company to an “AI first” company. That means the idea is not help you to find organized information over the web anymore, but to suggest what you are looking for. They have also made important acquisitions to strive its “recommendation first” strategy, improving some key expertise areas such as smart reply and predictive advertising.

Take a look at Amazon’s revenue growth and its net income graph:

It gets clear: for Amazon, monopoly > market profit. They are not focused on making profit. Amazons’ mission seems to be to seek the absolute market leadership while dismantle the retail industry. Scott Gallowey has a brilliant talk specifically about Amazon business strategy where he shows how and why investors and shareholders are increasingly looking for growth, even at the expense of profitability. It’s a “need for speed” game for billionaires only.

These companies seems to be pretty much satisfied with their own dominance of specific parts of the web while we are increasingly losing diversity of choices as users, content producers, developers, entrepreneurs. The internet market is getting less diverse.

A not so promising young

A satisfactory and sad perspective of the current situation is to think the internet is a descendant of past communication industries (telephone, radio, cinema and television). The web is about 15 years age, its a teenager. If we want to know what kind of adult this teenager will become, history tell us to look at its parents.

“Stop competing and start seeking for monopoly”: that’s not a strategy invented by any of these internet giants. The communication legacy taught us. The north American telephone monopolist AT&T, born from Bell Patent Association went to the American government saying “we will always be good, we will build the best telephone network in the world, help us to provide better services: give us monopoly!”. And then, they went from the ones that built technologies used by lots of different individuals, to ones controlled by just a few monopolies.

The American film industry also was quickly transformed from an industry that was kind of easy to enter, to one mainly controlled by a few Hollywood studios by using the well known argument: “we need more autonomy to apply censorship, we must have control over cinemas because it interferes on quality of the viewer’s experience. We just want to give customers better services”.

Following the same steps we are seen internet service providers (ISPs) fighting against Net Neutrality in Brazil and US. What they want is to control the order and speed in which it delivers content to users, dictating what kind of traffic people’s end devices can or cannot receive. This is something that already happens in Portugal for example.

Any of these tech giants we are talking about can team up with some network company and privilege their clients above all others, ending net neutrality. They could do it just by offering their services with a different level of quality depending on wich ISP do you use. In 2011 that’s something Google have tried with Verizon, the same Google we often see consistently expressing a desire to keep an open internet. The question is whether one day Google will have its heart of darkness moment.

When we hear people saying that the web is dying, it doesn’t mean that Google, Facebook, Apple or Amazon are killing the web, this actually means the web is losing relevance, getting less attractive. Just like the radio was affected by television. Just like television is been affected by on demand content stream. Now, at the age of the internet there is a growing tendency for creating closed cyberspaces, virtual networks where data can be created and shared without being available from devices outside these closed virtual environments.

Some of these closed cyberspaces are very efficient channels for people to communicate, share data and interact. For many people, they are so effective they make a web browser seem absolutely unnecessary. This is great for users, isn’t it? At the short-term it seems to be. Problems starting getting clear only after some time, when companies responsible for maintain its closed environments gets too much power over the rest, giving users a lack of options.

I believe we would not hesitate that much when facing a monopoly if there was an established validity. Many people admire monopolists on the rise for some reasons: during sometime they offer huge conveniences, powerful abilities and astonishing innovations. A young monopoly is usually associated to some medias’ golden era. Monopolies makes huge profits that may be reinvested in expansion, research and even public projects: AT&T cabled the role US country. Google scanned entire libraries. Unfortunely they are also restrictive and are often fighting against competition.

Would be nice if there were a way to enjoy the short-term benefits of monopolies without the long-term oppression.

Tim Wu proposed in his great book The Master Switch: The Rise and Fall of Information Empires an idea he calls “separation principle”. What he suggest (briefly) is that government institutions should regulate companies, in particular, companies who actually happen to be in a very good position to restrict individual freedoms. It might be a good start to prevent the long-term damages. That sounds good. But given most governments capabilities for proper regulation on any aspect, it is utopic to imagine descent regulation.

Many developers suggests a hole new model for the web: a decentralized web. Their idea is that web applications should be built using alternative approaches to client-server model, since having server as a man in the middle allows centralized control. Even if it’s hard to imagine the web effectively working without client-server architecture, developers are proving its totally possible to provide great software services by using P2P technologies, open protocols and mesh networks. There are many ready to use services built on top of these technologies such as https://datproject.org/ witch provides a data sharing protocol for applications and https://beakerbrowser.com/, a peer-to-peer web browser for hosting content directly from computers without needing any additional services.

The adoption of these decentralized services, or the concerning for proper regulation for huge information empires will only come when people realize the damage caused by dominant/monopolist companies. And who knows when or if people are going to realize it. But our daily choices, our habits, are the ones who get the truly power for changing the market. Your choice may be absolutely personal when you are considering which car to buy or which beer to drink, however, when thinking of communication tools, it is irresponsible and naive to think only of convenience.

If we are not able to guarantee the sovereignty of choices that the information age allows us to enjoy, we can not put the blame for damages and losses on those who are free to enrich by taking away our own choices.